...for school, and i am surprised to find myself not ready at all. gus has been counting down the days until school starts again for the past couple of weeks; sophie has talked of nothing but starting kindergarten since she turned five, which was several months ago. i know they have to go, i know it's allegedly good for them, but i can't help feeling like i want a little more time with my babies. it's especially hard to see sophie go--she seems too little for this!

tomorrow's the big day for both of them, and, thankfully, they're both at the same school for just this one year. i can only promise to try not to cry...much. hopefully i'll remember my camera.
Posted by lost in the triangle at 7:53 PM No comments: Links to this post

cuttin' out the evil 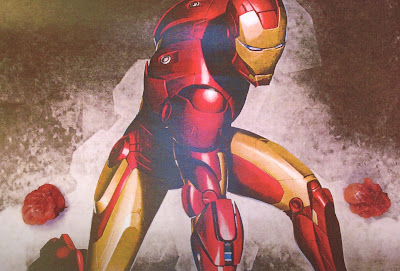 this would be the evil (not iron man)

poor little gus had a tremendously challenging day today: he had his tonsils and adenoids removed. those little fuckers have been dangling in his throat causing two tons of mayhem over the past 6+ years, but now they are no más. his PANDAS symptoms have been coming a bit too regularly for it to be healthy for him, so rich and i finally agreed to a tonsillectomy/adenoidectomy. gus did fair...he was a little more sensitive to the anesthesia than anyone thought he would be and it took him a while to recover...but he is improving every hour that passes. his doctor declared that "gus had old man tonsils--they shouldn't be found in a child," because years of chronic infection left him with hard concretions and decayed shit all over them. little bastards. in any event, they're gone now and with them the havoc they have wreaked on my poor son's body and brain. i do wish we had done this sooner.

now, with a very large amount of luck, we should see a reduction in (possibly) the frequency and (possibly) the severity of the PANDAS symptoms. it is almost too much to hope for. at the very least, his burgeoning sleep apnea was arrested. get better soon, sweetie.
Posted by lost in the triangle at 5:36 PM No comments: Links to this post

WELCOME TO THE WORLD, BABY ZANE! 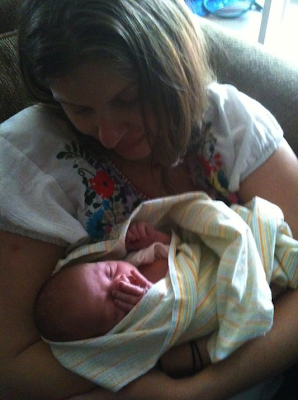 my sweet sister, lindsay, had her firstest baby ever last night...at her house...sans pain relief...and everything went remarkably well. zane elias bramwell, weighing a whopping 6 pounds 3 ounces, was born around 10:30, after 19 hours of labor. all in all it was a spectacular event; mom and baby (and dad, who looks a tad exhausted below) are doing fine. go team bramwell! 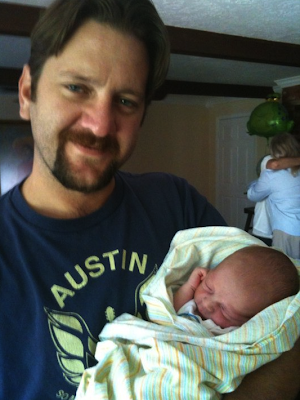 Posted by lost in the triangle at 12:30 PM No comments: Links to this post

it's late july in iowa, and, aside from being hot as fuck outside, that can only mean one thing: RAGBRAI! this year rich and gus rode the final leg, iowa city to davenport, on what i once thought was my and rich's tandem bicycle but what has somehow morphed to become rich and gus' tandem bicycle. damnit. they powered through about 65 miles of corn and soybean fields with thousands of other riders to arrive at the mighty mississippi river, which was mainly mighty dirty and a tad smelly from what i could sense. i, on the other hand, got to spend the day with a demanding 5-year old, seething that i wasn't out on MY goddamned tandem, and picked them up at the river.

it was truly sweltering for their ride. initially, we were concerned that gus might not be able to do the whole 65 miles--he had never ridden that far before, it was really hot, etc.--but rich ended up having his ass royally handed to him by gus (biking-wise). i think it was because gus a) is younger, b) has stronger legs, and c) seems to have a body that is able to regulate its temperature properly, probably because he has an iota of common sense that tells him to drink something when he's hot. rich came ***this close*** to needing an IV to cool down as he did in west texas years ago for the same exact reason (biking in the heat)--don't even get me started on having to drive 100 miles to find an urgent care center out there--but apparently that heat stroke knocked out the portion of his brain that reminds him to drink some fucking water when it's triple-digit heat indices outside and he's biking. either that or there really is just something wrong with his internal temperature regulatory system, in which case i'm totally sorry for mocking his disability.

anyway, they--ahem, GUS--did a fantastic job on RAGBRAI and they had a great time until the end when rich was hallucinating from the dehydration, but gus loved it...so yay! 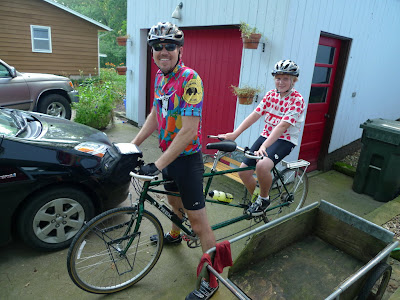 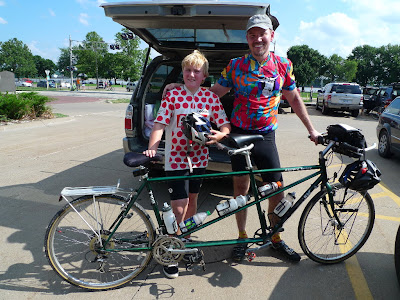 after the ride, and the only reason rich is standing is because he's pinned between the bike and the car 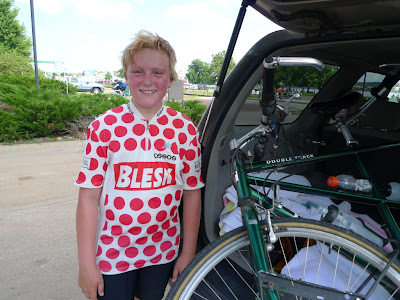 my biggest boy, after 65 miles of riding
Posted by lost in the triangle at 9:53 PM 1 comment: Links to this post