thank you, camp longhorn, for employing a really decent photographer and sharing your image captures with the world...my big boy is rockin' da blob (it's a camp longhorn thing)! 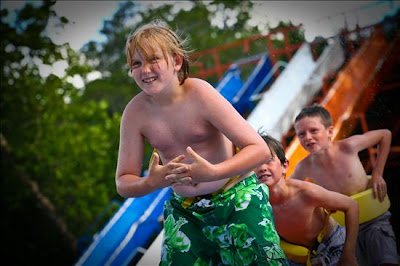 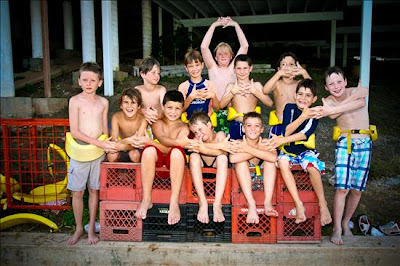 Posted by lost in the triangle at 8:54 PM No comments: Links to this post

...three of the four triangle members are on a grand adventure in texas and having a blast! gus is at camp and i swiped some images from their website of my biggest boy--more posts to follow (eventually). 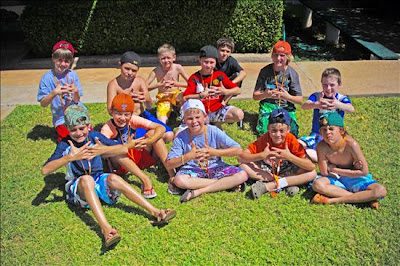 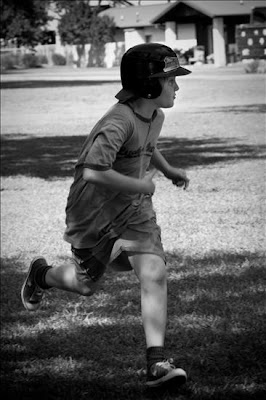 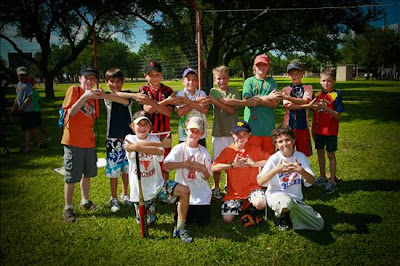 gopher pride
Posted by lost in the triangle at 8:06 AM No comments: Links to this post

the taming of the swamp, part three 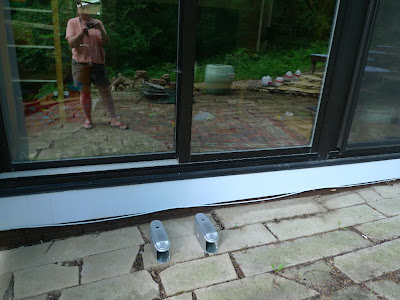 a pair of most venerated rat zappers, which let us down a bit this week (only seven dead chipmunks in the trash, damnit)--bringing the grand total to 19 this spring

have you been thinking about the swamp? lord knows i have--it's damn near consumed me since it has been warm enough to work outside, and work i have certainly done. i try to get out there as soon as i get sophie settled at school and work nonstop until i have to pick her up, then go back out again until i have to make dinner. admittedly, we've had some pretty crummy meals recently...however my generous neighbor marge estimates i've done 10 years of work outside in 10 months! i know it's an exaggeration, but i'll totally take the compliment.

so, to recap: we bought a house, with a swamp, which i managed to convince the city to drain. yay me! even though we did have to install a whole-house dehumidifier to live here comfortably, things are markedly improved from last year. now to recap, pictorially: 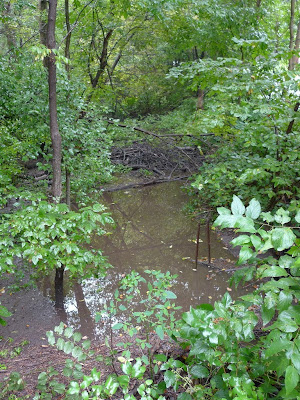 this is what we started with... 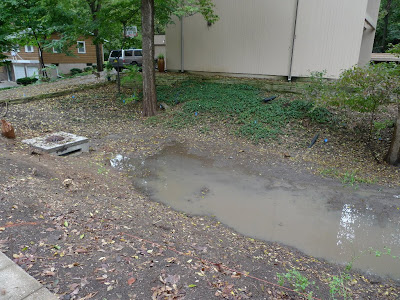 ...this is after the drain addition... 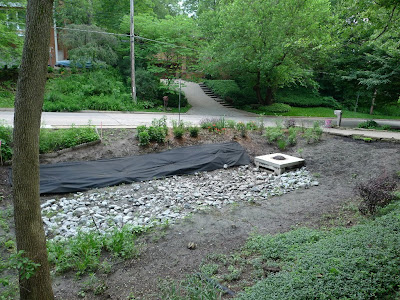 ...and this is a reverse view of the above, where we are today!

i've made serious progress on the swamp. i think i actually have to stop calling it that now. 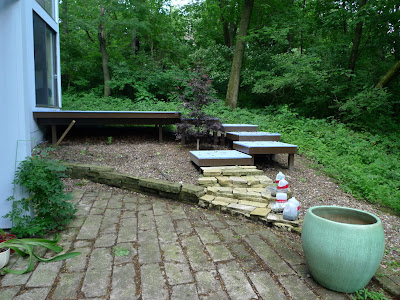 in the back: a reconstruction of the unfinished deck, complete with a long-lusted for japanese maple "bloodgood" 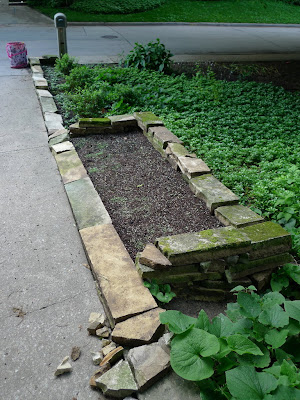 off the driveway: a hand-built (by me!) limestone raised bed for annuals, made with stone dug up in the back of the house. it is beautifully patinated. 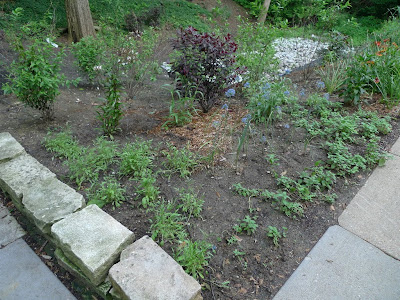 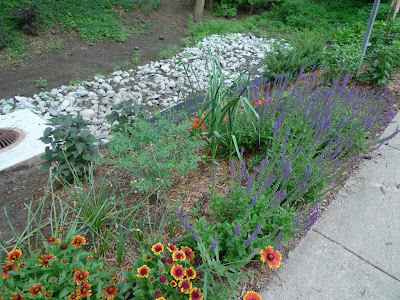 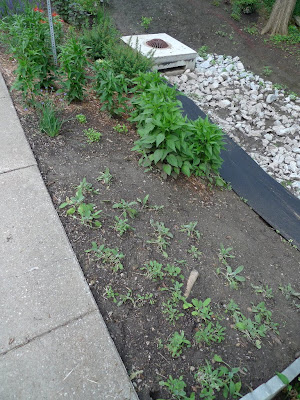 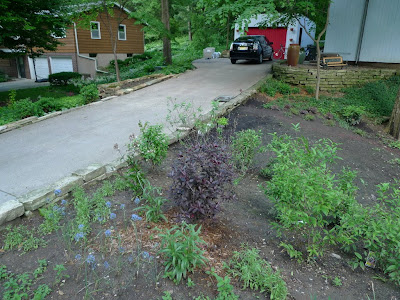 it is starting to come together, aided by the new coat of paint on everything (dig that red garage!) 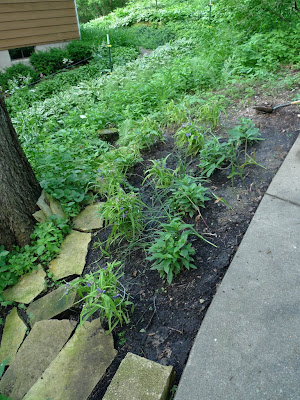 other side of driveway: flagstone path around an old hackberry for sophie (leading to a tree stump) with spiderwort and toad lily 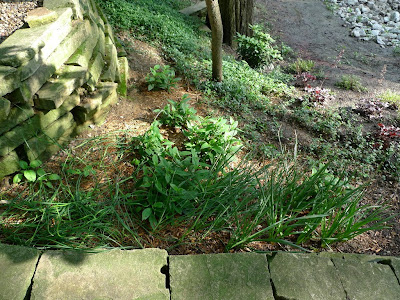 more toad lily and very long-lasting narcissus leaves, with vinca minor and heuchera in the background 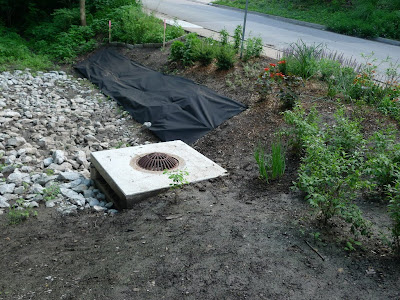 to summarize: drain. work. good. the weed barrier will have to stay up until next year, as i just can't figure out what to do on that slope (it is REALLY steep) 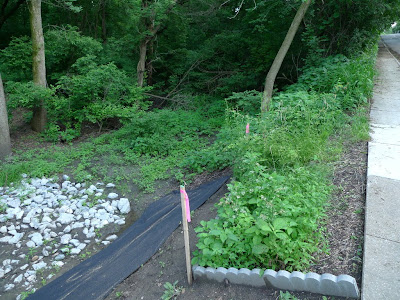 see that property line marker and the frightening amount of overgrowth behind it (which looks remarkably familiar)? guess what i've got my eye on...

updates to come.
Posted by lost in the triangle at 8:12 PM 2 comments: Links to this post 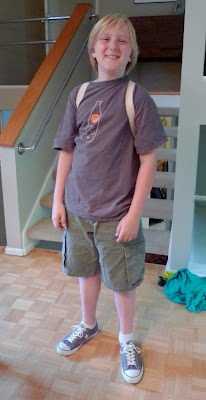 ...by sporting an absolutely kick-ass new 'do! 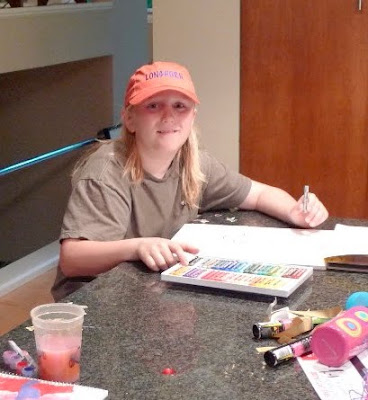 could this kid get any cooler? bring on summer!
Posted by lost in the triangle at 9:17 PM No comments: Links to this post

dead things in the trash this week: 10

seriously, 10--all chipmunks! i frickin' LOVE our rat zappers. we are so infested with chipmunks that it's either them or us at this point--those little fuckers are making our house slide down the hill and into the ravine (i guess i have to stop calling it a swamp) out front. you know, they're all cute and chip 'n dale-like at first, but now all i see are thousands of dollars of structural damage scampering throughout my garden. and i'm off for more D-cell batteries right now...
Posted by lost in the triangle at 9:44 AM 2 comments: Links to this post