what're you lookin' at?

if this had a keyhole-shaped frame, it'd be perfect. 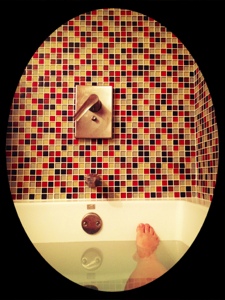 Posted by lost in the triangle at 10:02 PM No comments:

anyone lose a cookbook?

because i found a BEAUTY literally outside my door. about two months ago i saw a book at the end of my driveway; i picked it up and displayed it for whomever lost it, then finally retrieved it after it became obvious that no one was looking for it.  or no one was willing to claim they actually bought it.

*warning: if you grew up in the 60s or 70s, you will have food flashbacks. 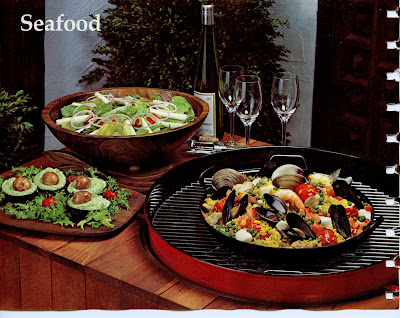 looks harmless enough...until you zoom in on the left... 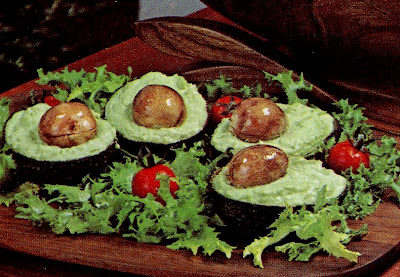 "guacamole," served in the avocado shell (is that hygenic?), with a considerably creamier texture than any guacamole i'd ever agree to eat.  even the lettuce seems to be angry, and after reading the ingredients i'm mad, too: 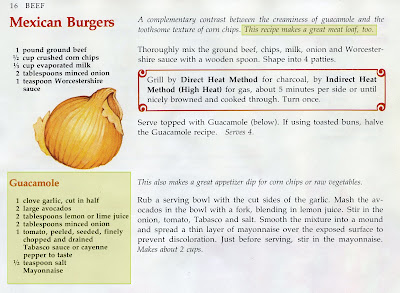 MAYONNAISE?!  who the fuck puts mayo in guacamole?  no wonder i hated this stuff until i was old enough to make it myself.  you need four things for guacamole:  avocados, tomatoes, a tiny bit of minced onion, and at least one lime.  maybe some jalapeño, probably some salt.  that's it.  if you're really lazy, you only need avocados and pace picante sauce. 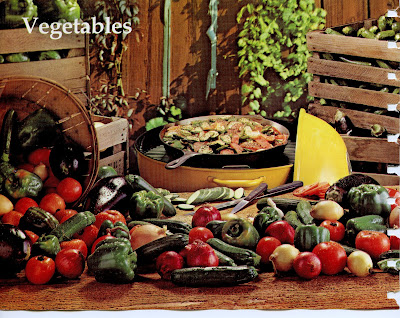 behold the bounty of the only grill-acceptable vegetables:  tomatoes, onions, bell peppers, and smattering of zucchini... 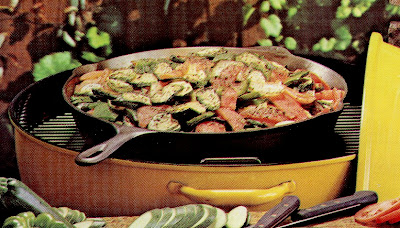 ...but don't actually put them on the grill--use a cast iron skillet instead.  overseason and cook to a palatable mush.  hello grilled corn-on-the-cob? 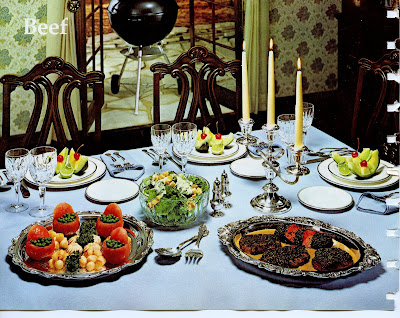 there were many things off-putting about this particular table setting... 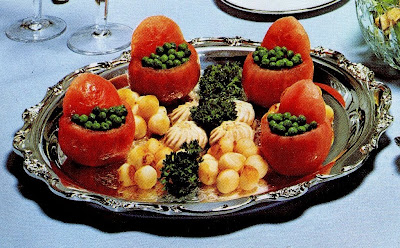 ...but i had to give this particular atrocity center-stage.  i have absolutely no idea why the hell anyone would stuff peas into a perfectly good tomato.  do those two even mix?  what did these tomatoes do to be subjected to such torture?  were they forcibly impregnated by a pea monster then made to carry to term?  were they rapists themselves in a former life?  and then to serve them on a silver platter and surround them by pearly onions and past-its-prime parsley is really just the icing on the cake.  NO. 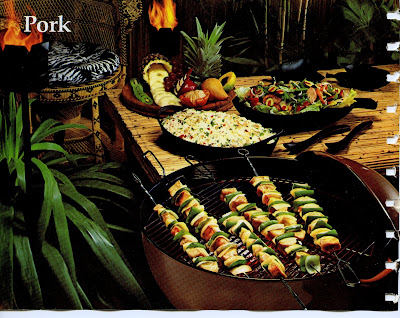 i know what you're thinking: hawaiian luau, bitches...gonna get me some poi tonight. 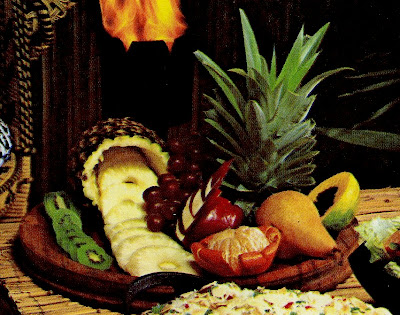 until you notice the vomiting pineapple in the background.  and the oddly-split orange shriveling up and curling back in on itself.  ewww.  luau foul.  what the hell is going on with that apple, too?  it's like smearing itself into another dimension to get away from the vomiting pineapple.  reminds me of this: 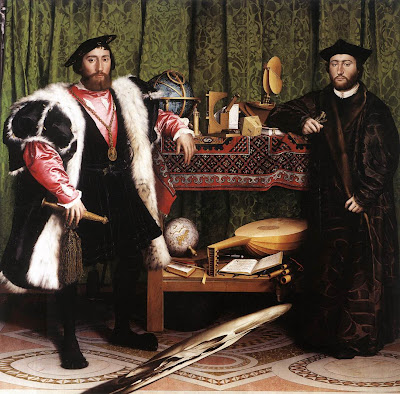 hans holbein, "the ambassadors," 1533 (the smear is a distorted skull, meant to be a vanitas symbol...so maybe the set designer was more clever than i thought...no, no he's not.) 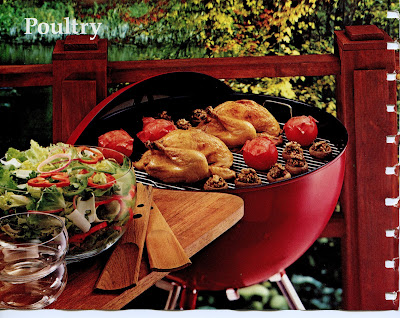 my first reaction to this is that it doesn't look that bad, although i sincerely doubt you can make a chicken or stuffed mushroom caps look like that on a grill.  my second reaction... 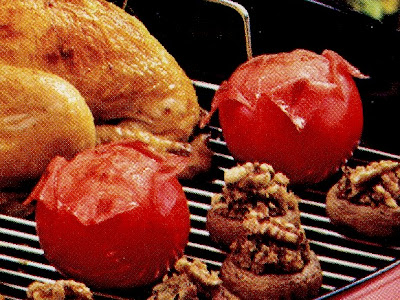 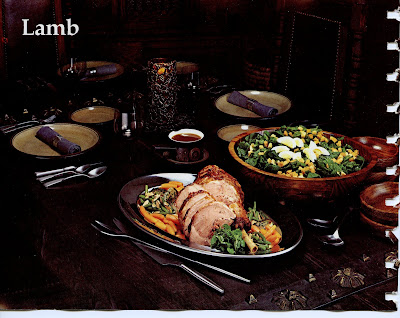 i was actually going to give this image a pass until i increased its exposure settings... 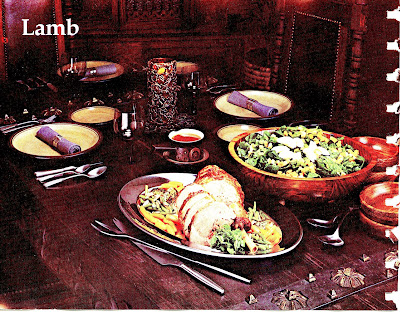 ...and found myself looking at the marquis de sade's dinner table.  the horror.


category four:
recipe atrocities
by this point reading the actual recipes themselves seemed a bit unnecessary, but having committed myself this far i thought i'd muddle through.  it didn't disappoint. 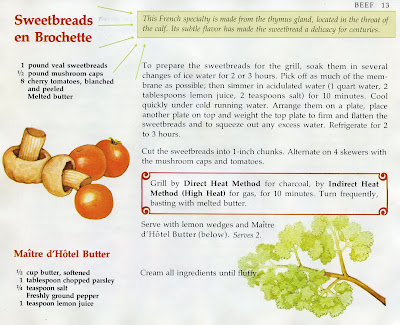 first of all, calling a thymus gland "sweetbread" doesn't make it any less disgusting.  second, i don't give a shit if it has been a delicacy for eons--offal is offal.  third, although it is half my gene pool, the french aren't known for avoiding foods the rest of the world would rather not think about. 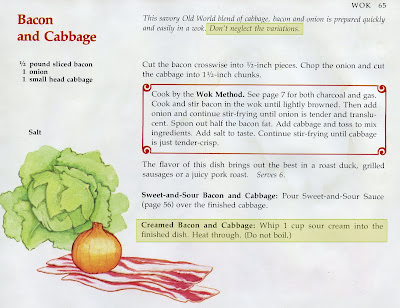 "don't neglect the variations."  yes, please do.  creamed bacon and cabbage should be on no one's plate.  on the upside, you don't have to buy a grill to prepare it. 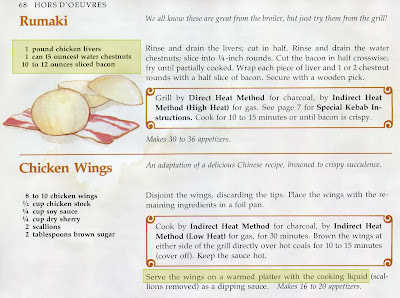 at first it was the rumaki recipe that sounded ripe for the funning, but after reading "serve the wings on a warmed platter with the cooking liquid," i felt that an appetizer of plattered salmonella might get the prize here. 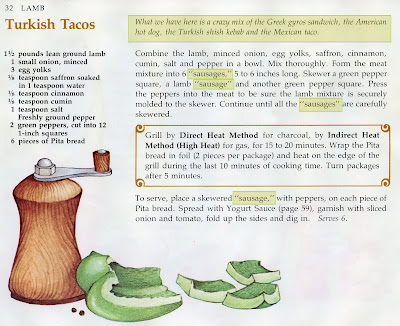 any recipe that addresses its main component in "quotes" throughout the "recipe" is most likely one that should be "avoided at all cost." 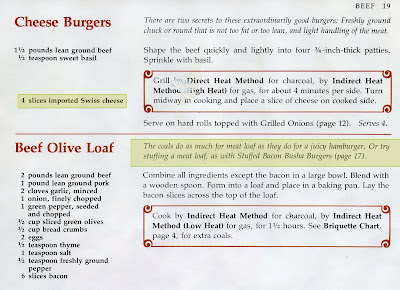 and now, meat loaves.  as with the mexican burger waaaay up above (meat loaf #1), the beef olive loaf doubles as not only a meat loaf but the special stuffing inside of a meat loaf (meat loaf #2).  it's like the red meat version of tur-duck-hen.  also noted: the stuffed bacon busha burgers can substitute as a meat loaf in a pinch (meat loaf #3). 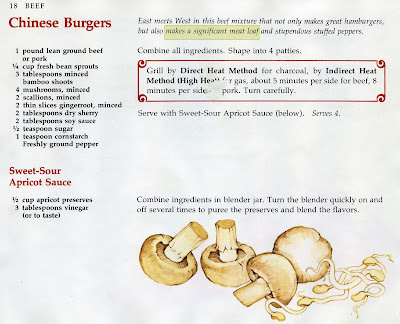 
Posted by lost in the triangle at 7:00 AM No comments: 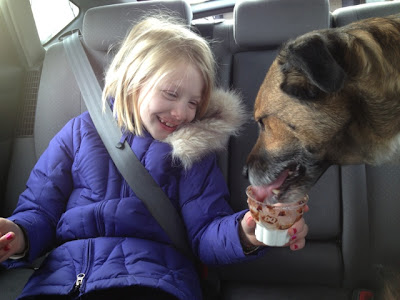 paco the brown dog and sweet sophie sharing a sundae

is a registry in my future? 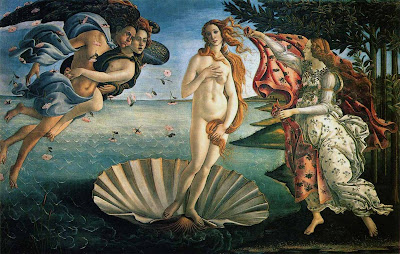 sandro botticelli, "the birth of venus" 1482

"the birth of venus"...so lovely...so tranquil...so possibly going to make me have to register as a sex offender...

today was the first day of a brand-new year of learning-at-lunch classes for me, and i've got three good ones that i'm teaching: embroidery, art history club (4-6 graders) and art history club (1-3 graders). today was 1-3 graders who were learning very, very basic art history (what is art? who makes art? where do you see art? etc.), and i ended our discussion with a challenge for the kids to invent a story using an image of a renowned work of art glued to an oversized index card, one of which was botticelli's "the birth of venus..."

...and a group of little girls kinda freaked. minorly freaked. they were kinda minorly freaked. they giggled then asked me if i knew she was naked. "she's not naked, she's nude," i said, realizing at that same moment that 6-8 year olds probably don't quite get the difference yet and if they're commenting at all they're probably not ready to analyze this image...so i said, "oops! you're right--let's use a different card" and gave them one with seurat's "sunday afternoon on the island of the grande jatte." it all took a matter of seconds.

the other three student groups came up with wonderful observations that i listened to with half an ear, as i was starting to sweat over the thought that one of those little girls was going to go home and tell a parent they "had art history club at lunch today and the teacher showed us pictures of naked people. what's for dinner?" after their apoplectic parent recovered their verbal ability i'm quite sure they'd make a call to the principal post haste, hence my worry that i'm going to end up registering as a sex offender for mistakenly showing elementary students a botticelli in class. 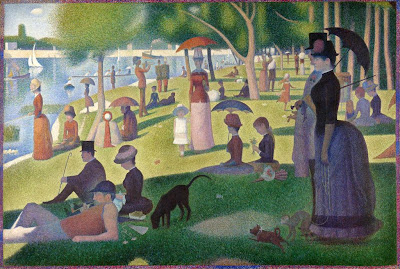 georges seurat, "sunday afternoon on the island of the grande jatte" 1881


***UPDATE*** 1/29/13
currently, not on a registry.  found out two days after the incident that the little girls didn't bother to wait until they got home--when asked by their teacher how learning at lunch was, they blurted out, "the teacher showed us naked pictures!"  i have no clue how the teacher responded to that information, but as it didn't result in a visit from the po-po i figure i'm alright.  i found out about this from a totally different set of little girls who were learning how to embroider...being taught by me...and after i told them i also taught art history they asked, "are you the one that showed the naked pictures in class?"

they all came back the next week.  :)
Posted by lost in the triangle at 8:38 PM No comments:

it's 2013 and we're all still here in the triangle, chilling with some majestic bald eagles that have taken to circling over our house. it is nice to see someone/something enjoying these god-awful temperatures...

new year's eve was fairly tame with the exception of one particularly bad round of monopoly, which nearly caused some minor violence in the house (never playing that again). everyone made it up to midnight; gus and i even set off some fireworks to celebrate. overall it was a good christmas break--the kids are already back in school and happy to see their friends, and i am back to doing whatever the hell it is that i do.

pictures of wintery/christmasy things eventually!
Posted by lost in the triangle at 9:38 PM No comments: