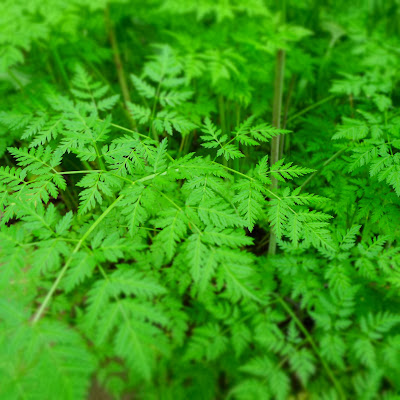 i can't decide if this is "no good deed goes unpunished," or "a little knowledge is a dangerous thing."  it might be both. 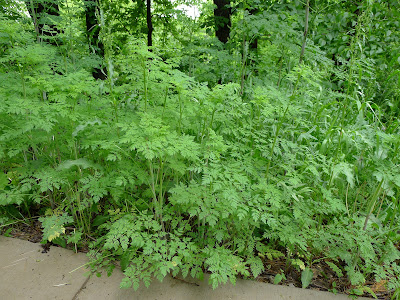 this is the walkway from the back steps to the front door of our sweet, lovely, most-appreciated, little neighborhood elementary.  it's on the upper edge of a ravine, it's lush, and it was populated by the most poisonous plant in north america, poison hemlock.  i saw it last year and mistook it for its less-poisonous cousin, water hemlock, but this year i knew just a little bit more and saw it for what it is/was...which is where my troubles began. 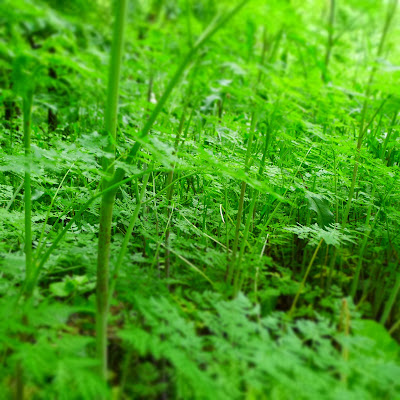 first, i got permission from the school to remove the hemlock ("it only takes .25% of a person's body weight to kill! think socrates! think of the children!"), and then i got permission to dispose of it.  having pulled weeds on public property before, i at least know what questions to ask.  then, i arrived at the school in my official master gardener's garb replete with ID badge, (i'm an expert, damnit!), showed the principal the area i intended to clear, she was sufficiently concerned, and the weeding commenced.

about 15 minutes into it i felt a little...off.   i was having a little trouble breathing, but i chalked it up to allergens and decided to remember to carry my inhaler with me in the future.   i say that a lot. the sky looked threatening, and i really wanted to get this stuff away from where the kids walk, so i pressed on.

an hour into it, i felt off and shaky, but i kept going because it hadn't rained yet and i was making good progress.   my leather gloves were soaked from pulling the hemlock (it is a watery plant, kinda like jewelweed).   the breathing was still a problem--would definitely bring the inhaler next time.

two hours into it, i was exhausted, not breathing well, was suuuuper thirsty, and definitely not feeling well either.  i figured i was dehydrated and developing asthma.  i had cleared four very full black plastic bags worth of poison hemlock, weighing about 150-200 pounds total.   i got all of it cleared off and away from the sidewalk; i did a good job.   i walked home, took off my clothes as soon as i went in the door, threw my gloves into a plastic bag to wash later, and took a long shower.  my heart was beating like crazy--i must be dehydrated!--then started drinking as much water as i could keep down.

fast-forward three hours: time to get the bunny from school.  still not feeling well, haven't eaten anything, just want to drink water, heart still beating like a hummingbird's, and i'm confused.  not like "i don't get it" confused, more like i'm not able to make a thought.   i walked back to the school, said hi to some friends, got asked a fairly simple question by someone, and could not formulate a response that made sense to anyone including myself.   finally came to the conclusion that there may be a problem, so the bunny and i went home, and i called poison control.

in my possibly misguided quest to save some dumbass kid from themselves, i managed to poison myself with the most lethal plant in america.

poison control was remarkably not condescending or judgmental--they were actually awesome.   they asked me a battery of questions, determined i was probably not going to die, but suggested that i keep drinking water.   it turns out that poison hemlock and nicotiana (tobacco) share an alkaloid that makes you quite unwell after extended physical contact with it...such as by wearing soaked-through leather gloves for two hours.  and, i needed to throw away the gloves as well, as the alkaloid would probably not wash out (they're gone now).  they even called me back after an hour to check on me--seriously, they were great.

i managed to fall asleep by midnight, heartbeat back to normal, still thirsty but not as thirsty, but with a killer hangover-type headache.  the next day i still had some muddiness in my brain, but at this point i think i can manage it.  overall, it was quite the experience.  so there you go--as always, my life seems to exist as a lesson for others...not necessarily in a good way. 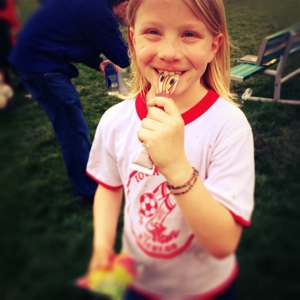 Posted by lost in the triangle at 10:44 PM No comments: