MAMA TURKEY IN THE RAVINE! 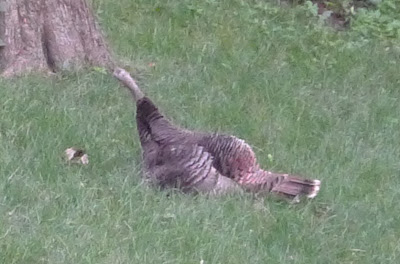 earlier this week, we saw our most recent resident in the ravine--a wild turkey--with her TWELVE new fluffy babies! today i finally got a video of them. she is down to about eight or nine poults as of this morning (maybe more--it is hard to tell in the video), and we know she lost one to a sharp-shinned hawk yesterday. (about half of the babies should make it to adulthood, according to statistics.)

i'm thrilled at the prospect of having all these wild turkeys in the ravine...i hope they stay. any suggestions on what i could plant to entice them to make this their permanent home would be much appreciated! enjoy.
Posted by lost in the triangle at 8:28 PM 1 comment:

hello, darwin awards? i'd like to become a member. 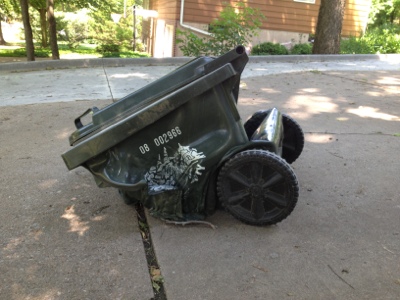 it's as if my recent brush with mortality via poison hemlock wasn't enough.  basically, think of the stupidest possible thing you could do that would result in a melted trashcan...and that's what i did.  bear in mind that as a child i didn't play with fire, and thus grew into an incredibly ignorant adult.

we've had a chipmunk explosion in the triangle, and the traps are working overtime--this past week we had almost 20 little furry bastards in the trash.  and, those almost 20 little furry bastards exacted a modicum of retribution by beginning to putrefy...which created a smell from hades itself...which drew flies. flies laid eggs; eggs hatched and became maggots.  even after trash pickup there were still about a million maggots writhing on the bottom of my trashcan.  and still with the smell from hell.
so, in my glorious ingenuity of trying to be ecologically sound and use no poison, i decided to try and kill them by pouring a gallon of vinegar in the can.  it didn't kill them, and now i had vinegar-scented smell from hell.  so, i dumped two pounds of salt in there with it.  nothing.
so...i started looking around the garage...and i see the gas can for the lawnmower...
i figured what the hell:  they're floating, gas floats, i'll just pour a pint or so on top, light it on fire, and burn them off.  seriously, this is exactly what i thought would happen.  what i didn't anticipate was the 20-foot column of fire that shot out of the trashcan and continued to burn (at about a 5-6 foot height then) for the next minute.  i was too stunned to move.
fortunately, i managed to tell gus (yes, he was there) to run inside and get a fire extinguisher.  i put the fire out literally one second before the can collapsed, which fell up against the garage...where the car was parked.
and now i've got a melted trashcan at the end of my driveway waiting for the city of iowa city to come and switch it out tomorrow.  i have no idea what they will charge me.  the shame, however, is free. 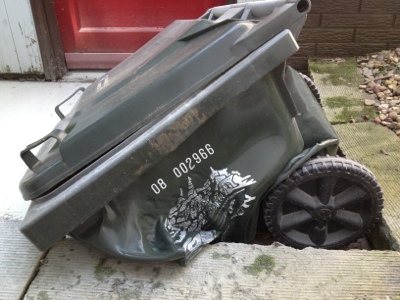 the aftermath.  (the powdered white stuff around it is from the fire extinguisher.) 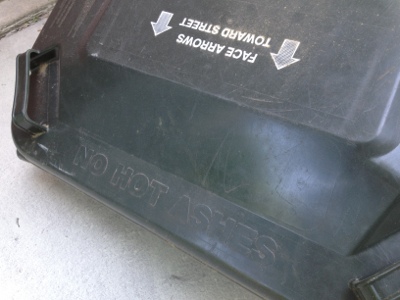 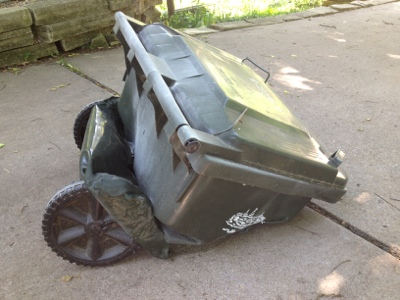