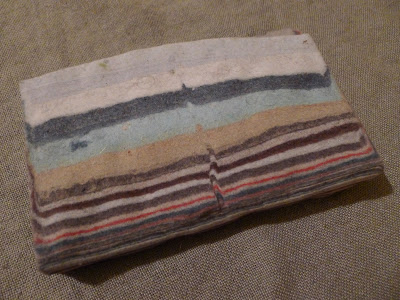 okay, this mystery was a bit more challenging than i anticipated, but, yes, as my friend jen pointed out on facebook it is in fact layer upon layer of dryer lint. a tremendous amount of dryer lint.

when we moved here, it took me forever to figure out how to even turn on the dryer:

would you know what to do with this? i didn't! to turn it on you press the left button when the knob is at 12:00 and only at 12:00, wait for the beep, then in theory set the cycle wherever you want, but it only works on the first stop to the right, then press the center button and wait for the beep and hope the thing starts rotating. i'm fairly positive there is a more intuitive way to turn on a dryer.

rich of course looked at it and figured it out in about a minute...ahem...but that's okay because i had a functioning dryer! the four of us amass a load or two of laundry a day here, as the machines are considerably smaller than back home, so a washin' i went for days and days and days. i checked the two little lint traps along the edge of the dryer every time i used it and was surprised by how little lint built up--european machines are so much better than back home! i was elated by this newfound respect for our clothes that the swedish engineers obviously had.

then, the dryer stopped working and started beeping. it beeped incessantly at me for apparently no good reason, and a big red light was blinking at me too. it turns out that this dryer sucks as well as blows and that there is a tube that holds the sucked-out water (about 3-4 liters worth) that has to be dumped out every now and again for the dryer to keep functioning. and, i also learned what the last button on the right was for, which is to tell the dryer that the water had been emptied. such crafty swedes!

a month goes by, then almost another, and the dryer really isn't working. in fact, it's crap--our clothes stay wet, even when cooked at high heat for two hours, and we've given up and are just laying wet clothes out on the beds. stupid swedes don't know how to make a dryer! then i notice that for some odd reason there is lint coming out of the top of the dryer...where the hell is this coming from--this dryer doesn't create lint...?

wrong. in fact, it had created about 3 inches of lint in the almost two months we've used it. and the lint had finally gotten so packed that it was spewing out of the top of the hidden lint trap that we never found in those same two months. i pulled it out, coughed my head off, then marvelled at the beautiful striations of clean clothing colors created by our awesome swedish dryer. i'm so obsessive about cleaning the screen at home that i honestly didn't even recognize what it was at first...hence the photo contest! amazingly, now that the lint trap is clean, the dryer dries everything in a maximum of 20 minutes, even jeans. thank god nothing caught on fire.

is it wrong to admit that i'm really tempted to try and make another one?
Posted by lost in the triangle at 12:50 AM